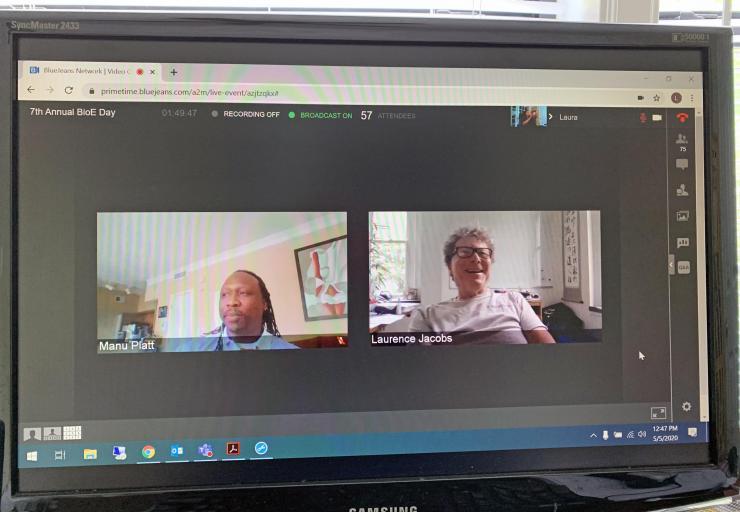 In May 2014, the students in the BioEngineering Graduate Program (BioE) at the Georgia Institute of Technology sought a way to build community, showcase science, and recognize the outstanding achievements of graduate researchers and principal investigators. So they invented BioE Day, and it became a spring tradition.

Managed by the BioEngineering Graduate Association (BGA), the event brought keynote speakers who are some of the top researchers in their fields. Also, students put their work on display in a poster session throughout the atrium of the Petit Institute for Bioengineering and Bioscience, headquarters for BioE, or they gave live presentations of their research in front of a packed audience in the Suddath Room. And the day always culminated with an awards ceremony followed by fun and games, inside or outside, depending on the weather.

This year, thanks to a worldwide pandemic forcing social distancing practices (which means a mostly closed campus), the BGA employed a few new and necessary tricks to keep the tradition alive. The seventh annual BioE Day became the first virtual BioE Day, which basically included everything except for the poster session and frisbee on the quad. Ultimately, the event (May 5) was a welcome taste of normalcy for a sprawling program that has built a reputation as one of the top ranked of its kind in the nation.

“Throughout the year there are seminars and other events held by BioE to help create community, but none of these are ever as special as BioE Day,” said BGA President Bailey Hannon, a graduate researcher in the lab of Ross Ethier, professor in the Wallace H. Coulter Department of Biomedical Engineering at Georgia Tech and Emory University.

“Virtual BioE Day was a way to still form a sense of community and enthusiasm that is desperately missed these past few months,” added Hannon, who was named winner of this year’s Christopher Ruffin Leadership Award. “I think now more than ever, BioE Day was super important, because when you’re sitting at home and not allowed to continue your research, it can be difficult to stay motivated and excited.”

More than 170 people took part in the event, sitting in their living rooms or home offices or wherever they’re doing their work these days, including Laurence Jacobs, associate dean in the College of Engineering, who offered a few words to the virtually gathered crowd. The schedule was dominated, as usual, by talks about science. They were delivered by current BioE Award winners. Leading off was ShuichiTakayama, professor in the Coulter Department (Outstanding Advisor), who offered his “Journey to Bioengineering.” Next up was Monica McNerney, who graduated from the BioE program last year and was the winner of the Outstanding Thesis Award. Her presentation was entitled “Biosensors for Field Deployable Diagnostics.”

As the Ruffin Award winner, Hannon took home one of the most coveted prizes among BioE students, and it’s a reflection of her years of leadership within the program, during which she focused on a healthy work-life balance, “because when you are happier and more relaxed overall, retrying that failed experiment for the 102nd time seems a lot less daunting.”

She added, “Winning the Ruffin Award was amazing because each year I’d see the winner of this award and think to myself, ‘of course, that was so well deserved, they did so much for the program.’ And now that’s me! I’m incredibly thankful and in shock. It’s also bittersweet because it really means that I’m leaving the BioE program and all of the people that I’ll miss so much.”

Though it was a shorter event and though the participants were separated, sometimes by many miles, the virtual edition of BioE Day was a big hit, according to Zhang, who is BGA vice president. “A lot of credit goes to our BioE Day chairs, Hannah Viola and Mighten Yip, who were instrumental in coordinating many of the logistics,” he said. “BioE Day at its heart has always been driven by students, and they've really embodied a spirit of leadership and service in planning this event.”

Zhang also called out Petit Institute staffers Colly Mitchell and Randy Johnson, “for all their help in taking care of technical considerations for a virtual event, and moderating the actual flow of events. And as always, Program Administrator Laura Paige is a key force behind anything and everything BioE-related.”